A picnic in October 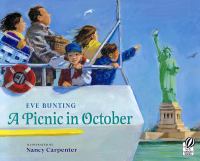 Search for related items by subject

A Picnic in October
by Bunting, Eve; Carpenter, Nancy (Illustrator)
Rate this title:
vote data
Click an element below to view details:

A Picnic in October

Eve Bunting was born in 1928 in Maghera, Ireland, as Anne Evelyn Bunting. She graduated from Northern Ireland's Methodist College in Belfast in 1945 and then studied at Belfast's Queen's College. She emigrated with her family in 1958 to California, and became a naturalized citizen in 1969. That same year, she began her writing career, and in 1972, her first book, "The Two Giants" was published. In 1976, "One More Flight" won the Golden Kite Medal, and in 1978, "Ghost of Summer" won the Southern California's Council on Literature for Children and Young People's Award for fiction. "Smokey Night" won the American Library Association's Randolph Caldecott Medal in 1995 and "Winter's Coming" was voted one of the 10 Best Books of 1977 by the New York Times. Bunting is involved in many writer's organizations such as P.E.N., The Authors Guild, the California Writer's Guild and the Society of Children's Book Writers. She has published stories in both Cricket, and Jack and Jill Magazines, and has written over 150 books in various genres such as children's books, contemporary, historic and realistic fiction, poetry, nonfiction and humor. (Bowker Author Biography)